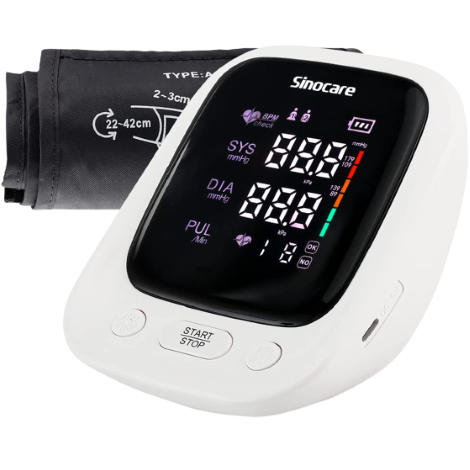 Sinocare is a relatively known name in the healthcare industry. Thus, our team decided to test it. After a first run it became evident that the most striking feature of the monitor is an integrated voice function. The voice-over reads the measurements out, which is excellent for senior citizens. However, if you wish to disable voice-over, it is difficult to do so. Plus, we've felt that the voice-over is too loud, and it can become annoying over time. The rest of the features are relatively common to other blood pressure monitors. Sinocare has a large LED display with sharp and clear numbers showing your blood pressure and pulse. Thanks to that, all your measurements are easy to read, even if you have poor eyesight.

Furthermore, Sinocare has a two-user mode with 90 readings per person and a coded warning if your measurements are out of the ordinary. However, even though the device possesses a memory feature, it is hard to set it up and check later. Also, the buttons to set up the memory were quite complicated to master. Finally, Sinocare displays errors on its screen, and you can match the error symbol to the one in the user's manual. It's a fairly straightforward operation, so there shouldn't be too much hassle over it. Overall, Sinocare AES-U181 is a pretty basic blood pressure monitor with an additional voice function.

One of the better aspects of Sinocare is the design of this gadget. It is easily transportable and compact enough to be conveniently stored. It comes in handy for the elderly who don't want to deal with heavy and bulky blood pressure monitors. For them, Sinocare would make an excellent choice. A large LED-backlit display can also simplify assessing your blood pressure no matter what time of the day it is.

Furthermore, Sinocare has an adjustable cuff that ranges from 22 to 42cm, so it should fit most people. However, while we were testing it, we found that the cuff starts to squeeze your arm very tightly while measuring. Thus, the cuff becomes really uncomfortable, even compared to others. On the plus side, this particular Sinocare model runs on 4 AAA batteries, which are already included, so at least at the start, you won’t have to worry about it.

Sinocare has a very straightforward one-button operation. Simply press "Start," and the measuring process will begin. However, if you need side buttons for memory features, you might find it challenging to operate them. To take your measurements, you have to make sure you wear the arm cuff correctly. It should be not too loose and not too tight, and the red-marked area should point to your vein. To get an accurate reading, place your arm on a stable surface, sit straight, and relax. It would be even better if you didn’t move or talk. You can always turn on the voice function for assistance if you can't read your measurements. But, as mentioned before, voice assistance is difficult to enable/disable, so be aware.

Although the overall performance of Sinocare is respectable, we did find it a bit difficult to operate. The cuff also seems to be an issue as it is very uncomfortable during the measuring process. In other words, while the price relatively fairly reflects the features, you still would have to pay extra for shipping. Also, it might be better to invest your money into a more reliable device with the same features.